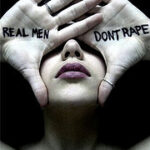 After reading that story, I wrote to the editor who published my comments, including mental images of running through the streets, article in hand, demanding enough, enough – this has got to stop!!

But it hasn’t stopped, as we well know. According to the Rape, Abuse & Incest National Network (RAINN), 1 of 6 U.S. women will experience rape or attempted rape in her lifetime. Shocking figures. But we’re made aware of this situation almost daily.

Case in point, I just watched another news story about Jamie Leigh-Jones, now 22, who while working for Halliburton in Bagdad, was drugged, brutally gang-raped by coworkers and when she threatened to go public, was locked in a shipping container under armed guard. Finally she was able to convince a sympathetic guard to loan her his cell phone enabling her to call her father in Texas.  What’s particularly horrible here is Halliburton attempted to cover up the crime.

Only moments later I heard breaking news about the former International Monetary Fund chief Dominique Strauss-Kahn. Just as the New York case against him involving  a hotel maid seems all but over,  other charges by a 32 yr. old French journalist, Tristane Banon, declare he attempted to rape her in 2003 when she interviewed him for her first book.

No, rape has not stopped — maybe it never will. It is an act of aggression, born in extreme dysfunction. I cannot stay silent and now, as then, would ask the following of every emotionally conscious man: More than being kind in your own male-female relationships, take a stand and be vocal against abuse whenever the opportunity presents itself. Maybe your courage to do so will lead to another man embracing the same essential values of respect toward females of any age – everyone for that matter.

Nearly sixteen years after I wrote that outraged letter to the editor, I again implore, “If you see abuse of any kind, do not turn away or pretend it isn’t there. Name it. If you are guilty of abusing anyone, verbally or otherwise, please get help now!”