The Impact of What We Teach Our Children 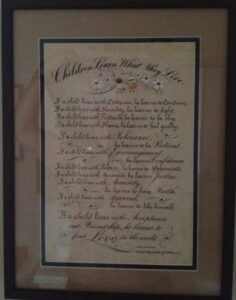 Recently I watched the inspirational movie by Mike Pavone, “That’s What I Am.” At its core, it’s a film about human dignity, courage and compassion – essential ingredients in healthy love.

When an immature, bullying 8th grader starts an untrue rumor claiming that the highly regarded teacher, Mr. Simon, is gay, we watch this malicious behavior fester, as it unleashes a current of toxic, fear-based emotions into all the connected relationships. We also get to witness the courage required by those who recognize how destructive such behavior is and decide to do something about it.

When the movie zooms in on the home of the boy who started the rumor, we get a glimpse into the relationship between his parents and how their views have influenced his cruel behavior. The father is a muscle bound homophobic, possessing no gentleness. His wife, the boy’s mother, appears to be frightened of him and starved for respect and genuine intimacy.

We begin to see that starting the rumor is a result of the boy’s having absorbed his father’s prejudice against homosexuals. It is stunning both in the film and in real life when we see how these dysfunctional beliefs travel from one generation to the next.

In the film, though he’s responding to a false rumor of his son’s creation, the father accepts it as fact. As a result, he angrily confronts the school’s principal, demanding that she fire Mr. Simon — stating that his son will no longer attend any of the man’s classes.

From a therapeutic perspective, the father’s homophobia is a projection of his own fragile character and fears about his masculinity. This condition is at the root of both the father’s and the son’s problems. Only when a parent or a child understands that their emotional problems are impeding healthy relationships that one or both of them can make the changes that lead to healthier love.

Here’s a link to an earlier blog post  where you may read a wonderful anonymous poem entitled “Children Learn What They Live.” It beautifully illustrates how dysfunctional attitudes make it from parent to child and offers some things to consider that can help to break the cycle.

In addition, this wonderful little movie includes two song tracks, which I’m sharing, that further address the influence – positive or negative – that parents can have on their children:

“You who are on the road

Must have a code that you can live by

And so become yourself

Because the past is just a good bye.

Their father’s hell did slowly go by,

And feed them on your dreams

The one they picked, the one you’ll know by.

Don’t you ever ask them why, if they told you, you would cry,

So just look at them and sigh and know they love you.

And you, of tender years,

Can’t know the fears that your elders grew by,

And so please help them with your youth,

They seek the truth before they can die.

Can you hear and do you care and

Can’t you see we must be free to

Teach your children what you believe in.

Make a world that we can live in.

Their children’s hell will slowly go by,

And feed them on your dreams

The one they picked, the one you’ll know by.

Don’t you ever ask them why, if they told you, you would cry,

So just look at them and sigh and know they love you.”

There’s something about reading lyrics for their poetic meaning. But for the music lovers who would enjoy a jolt of human spirit today, click here to listen to the song. While you’re at it you may also enjoy reading the lyrics from and listening to the other stand-out song from the movie.

“Go Ahead and Dream”

“Go ahead and dream.

Don’t be afraid to laugh when others cry, to live instead of die.

Life isn’t what it seems, so go ahead and dream.

Go ahead and run.

Don’t be afraid to open up the gate.

To love instead of hate.

Life isn’t what it seems, so go ahead and dream.

Go ahead and walk right into fear.

The answer is to clear your mind and free your soul.

It’s how you go from here.

So go ahead and dream.

You know your only quest is here to take, to put those lies away.

‘Cause life ain’t what it seems.

The truth is in your dreams.

Go ahead and dream.

‘Cause life ain’t what it seems.

So go ahead. Go ahead and dream!”