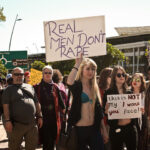 Last weekend, CBS Sunday Morning ran a story about sexual assault on college campuses. The report stated that this serious problem is far more prevalent now than in the past.

It was another Sunday morning about 20 years ago when I was enjoying a coffee and reading the local paper, the Journal News, and caught the headline, “Assault, Attempted Rape Charged.” The story was about an unthinkable crime:

Two men were indicted on charges they tried to rape a woman after they tied her up in her apartment and beat her for several hours. Fortunately, the woman was able to free herself, run from the house, flag down a car and get away.

Reading about the assault shattered the peacefulness of that Sunday morning. I sat down and wrote a letter to the editor to share my revulsion at the brutal act and to call for a stop to such violence. The article was published by the Rockland Journal News on November 5, 1995.

Writing it, I could sense the indignity, violence and fear this woman was forced to endure, but it’s impossible to know the impact of such an experience unless you have lived it: trapped, terrorized and repeatedly violated.

The woman had become an outlet for the impotence and insanity of the perpetrators – as does every woman who is a victim of domestic or ideological abuse.

In the letter to the editor I asked, “Where was this woman going to turn now or ever again to feel safe? How could she ever learn to trust a man again? Even a conscious, gentle and loving man gets angry once in a while. For her such moments will forever bear the residue of terror.”

I went on to say, “The time is long overdue for men to face the injustice found in patriarchal attitudes that, at the very least, tolerate male violence and abuse.” I described wanting to go door to door demanding, “Enough, enough, this has got to stop!!”

It has not stopped or slowed down – it has gotten worse! According to the CBS Sunday Morning story, rape on college campuses happens much more than ever before. The only good thing reported was the raised voices of some courageous young women talking about what happened to them and doing so in a very public way. Hopefully their actions will take the issue out of the dark and help bring about long overdue and much needed change.

I reflect often about all the influences that contribute to the pain, fear and anger of those who disrespect others, acting out aggressively toward strangers and even those they claim to love.

As I did in 1995, I again want to enlist every conscious man this may reach to help end male violence. We may not be able to put an end to all abusive behavior in the world, but we can change the world one conscious, respectful, kind and loving act at a time!

If you see abuse, do not turn away or pretend it isn’t there. Name it! If you are guilty of abusing anyone, verbally or otherwise, please – please get help now.