Part Two: Turning the Page on Sexual Misconduct: and Other Abuse

In my recent article “Turning the Page on Sexual Misconduct”, I only focused on a most egregious and abhorrent form such behavior takes – when someone with a great deal of public power and influence uses it to manipulate, control and take sexual advantage of someone who for a variety of possible reasons in that moment does not stand up to the abuse.

My thoughts about this remain unchanged. I spoke about the character flaws in those who operate intentionally, maliciously, disrespectfully toward others with little to no sense that their behavior is damaging and totally unacceptable. They operate from a pompous, arrogant sense of entitlement and lack of conscience.

A number of responses to the article from women lead me to further the discussion and broaden it a bit. Some of the women, while appreciating what I said, also pointed out that the kind of abuse I wrote about has never happened to them. Their basic sentiment was that many of the women now in the forefront of the #metoo movement in fact wanted 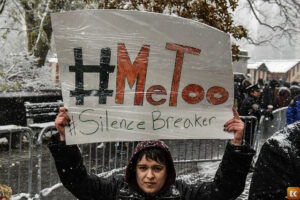 something from the men they’re accusing (examples: a movie role, a job promotion), got it (regardless that the cost may have been unwanted sexual contact) and now are claiming abuse.

Further, they pointed to cases where they met with the same man alone again in such isolated and sexually charged places like a hotel room or hot tub. They asserted that they had never nor would ever do the same and that somehow these women were complicit in what happened.

As a foundation for further discussion of this topic, consider the fact that human relationships, beginning first with the one we have with ourselves, require respect, dignity and trust to qualify as healthy, mature and responsible. Our self relationship forms the basis for how we relate to and treat others.

In some cases women who lack a healthy relationship with self may contribute to being subject to abuse. However, the topic of sexuality, personal choices and interpersonal relationships is far too complex to look at from any one vantage point — the one I wrote about or those of the respondents.

There is no one size that fits all when it is about relationships!

We cannot paint with one broad brush stroke, all the men who have been publically confronted and sanctioned, as if they are identical. Some are seriously deranged – others are not! Neither are all the women involved in these stories and their experiences the same.

Human sexual instinct begins at birth. It evolves and manifests in a myriad of ways throughout life. Immature experimentation is common and normal in childhood development and beyond.

Situations occur in which two people begin playing consensually in a sexual manner; one wants unlimited and uninhibited sex and the other while not ready for that, for one reason or another lacks the assertiveness or adequate personal boundaries to clearly say “NO” refuse to continue, but lacks the fortitude to leave the situation.

“NO” when it is about personal boundaries, physical or emotional, means “STOP!” Yet absent a clear “NO”, sexual behavior of the person who wants it may continue because the passion has not been clearly interrupted by the one who wants to stop.

There are many possible reasons for this; too many to comprehensively list here.  All males or females who continue sexual behavior toward someone who wants to stop, even if the object of this behavior is unable to make it forcefully clear, are behaving unacceptably.

Learning about healthy – or unhealthy — relationships begins in childhood when personalities are forming. As stated in the title of an anonymous poem framed on my office wall, “Children Learn What They Live!”

Bullying behaviors are learned in childhood, the result of any or all experiences of  fear, disrespect, boundary violations and abuse. These experiences produces low self-esteem and the sense that one is “Not Good Enough.” Without the willingness to change this deeply ingrained belief through appropriately focused work on personal growth, that wound can last a lifetime and result in many behaviors by which such people go about altering their essential, negative sense of themselves.

Mood altering through addictive behaviors is one way. Creating situations where they may control others physically or emotionally is another.

In addition to sexual misconduct, we are also hearing from women about more brutal physical abuse. Notably, White House staffer Rob Porter resigned after his two former wives revealed their experiences of abuse at his hands as part of his FBI security clearance process.

Porter’s first wife wrote a revealing opinion piece in the Washington Post about subtle seduction and courtship by a charming man that, three years into the relationship and post-marriage, turned into emotional and physical control. While their may have been red flags along the way, they’re often very difficult to recognize given the well-honed ability of abusers to manipulate others and obscure their true natures.

This woman made the point that, while women who find themselves in abusive relationships and who may even remain in them for considerable time, exhibit enormous personal strength and courage to leave and grow beyond these situations. I agree.

The highest level personal relationships can achieve is sharing great love! That requires far more than basic respect. Getting there is not easy for most people. If it were, everyone would do it! A number of other articles available in Things To Think About, the blog page on my website address various other aspects of good relationships especially Love, which is at the heart of it all. “To Love Is To Give!”